Tim Went From 15 Bowel Movements A Day To 1

After suffering from IBS-D for over 25 years, Tim was at his whits end.

Throughout the years, he tried different diets, supplements and consulted with multiple medical doctors who performed numerous tests trying to get to the bottom of his symptoms. And they were all stumped.

As the years went by, he knew he was on his own. He tried his best to manage his symptoms, investing money in countless supplements he found online that promised to reverse his symptoms and be a 'miracle cure', but with no luck. Nothing seemed to work.

He told us later that "I felt like there was a dark cloud over me for 25 years. I didn't think I would ever be healthy again." "Waking up every day was a nightmare. I couldn't leave my house in the morning ... I was so depressed and had such a negative attitude."

When he came across Optimized Health, he said the masterclass "described me to a T ... You were the only person in 25 years who actually was describing my symptoms ... what my life was."

Ironically enough he had just seen a new doctor the day before, hoping to learn about any new treatments that might be now available for IBS-D patients. Yet, to his dismay, nothing had changed. This new doctor was saying the same things all the other doctors had been saying to him for the past 25 years. No new treatments were available.

Since nothing had worked for him so far with his IBS-D, he decided to book a break-though call as he had 'nothing to lose'.

Here's one of his many food journal entries he sent us during the 12 weeks: 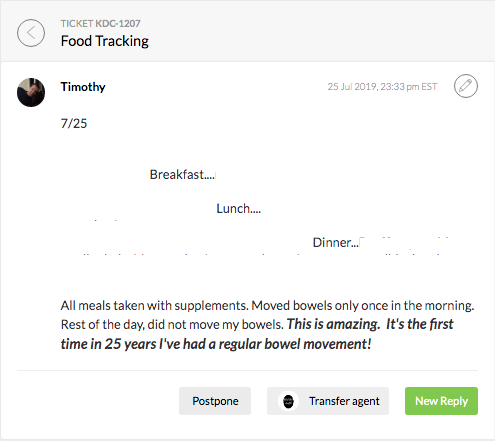 He said that The Optimized Health Way changed his life and now he feels like a totally different person. He feels he has a whole new perspective on life and is able to do things that he hasn't been able to do in years.

He even wrote to us a year later to let us know how life changing our work was for him! Here's the post:

The best part about this success story, is that it is repeatable one!

This means …you could experience freedom in your health too!

With the right methods, support, love and guidance in place, you can have the same lasting reversal of IBS-D that  experienced.

You’re life could be forever changed for the better.

What you need to do is get to the ROOT of the problem that is causing your symptoms in the first place, rather than just going on a LowFODMAP diet, buying countless probiotics or taking IBS Medications. Just read the Vital Gut Health reviews.

People are constantly wanting to get the best supplement or probiotic to reverse their violent diarrhea.  But here’s the truth… that doesn’t exist.

Your situation is not one you can fix with a pill or by cutting out a single food.  It truly is a combination of many things done over a period of time with the right guidance and support to make it a reality.

To learn more of what Tim did to put his symptoms into remission, sign up for a free call:

Schedule a FREE 45 minute breakthrough session with my team where we'll get you clear on how to finally overcome and breakthrough IBS and IBD problems.

But it's not for everyone...

Here's who I can help:

You must be willing to take 100% responsibility for your health.  You are not a "victim" to this disease.

You must be a person that is coachable and open to a totally different method than what you've learned or know.  If you think you've got it all figured out then this is not for you.

You have to be completely sick and tired of your current processes.  Whether that be a doctor or your own supplementation method.

You have to be hungry to fix this problem NOW.  I mean really committed.  Not to fix it next week, next year or next decade but now.

And, you have to be open to investing in yourself and your health.

If you're tired of being terrified that you might miss the bathroom, the toxins building up in your colon, the overwhelming emotions, the panic attacks that completely consume you and not being the person you need to be for the people depending deeply on you, and you're ready to get real results, then I'm making the time to show you how it's done.

You Don't Have To Do This On Your Own... Book Your Call NOW

This website uses cookies to improve your experience while you navigate through the website. Out of these cookies, the cookies that are categorized as necessary are stored on your browser as they are essential for the working of basic functionalities of the website. We also use third-party cookies that help us analyze and understand how you use this website. These cookies will be stored in your browser only with your consent. You also have the option to opt-out of these cookies. But opting out of some of these cookies may have an effect on your browsing experience.
Necessary Always Enabled
Necessary cookies are absolutely essential for the website to function properly. This category only includes cookies that ensures basic functionalities and security features of the website. These cookies do not store any personal information.
Non-necessary
Any cookies that may not be particularly necessary for the website to function and is used specifically to collect user personal data via analytics, ads, other embedded contents are termed as non-necessary cookies. It is mandatory to procure user consent prior to running these cookies on your website.
SAVE & ACCEPT