Franklin came to us after suffering with Ulcerative Colitis for 10 years.

He had maintained a pretty healthy diet and his doctors put him on Prednisone every time he had a terrible flare up.  Then, in January 2020 he started having blood in his stool again.

In February, his doctors put him back on Prednisone like they had for the past ten years. Except this time, it didn't work.

Franklin was stuck going 10X a day with blood and mucus in his stool. His wife was worried. His kids were worried. And he was worried.

With no answers from the medical community or his doctors, Fredrick was fed up and ready to try something new.

After 1 week of working with us, the blood and mucus stopped and within a few weeks, he was having regular bowel movements every day.

Here's a email we received from Franklin in his final week working with us: 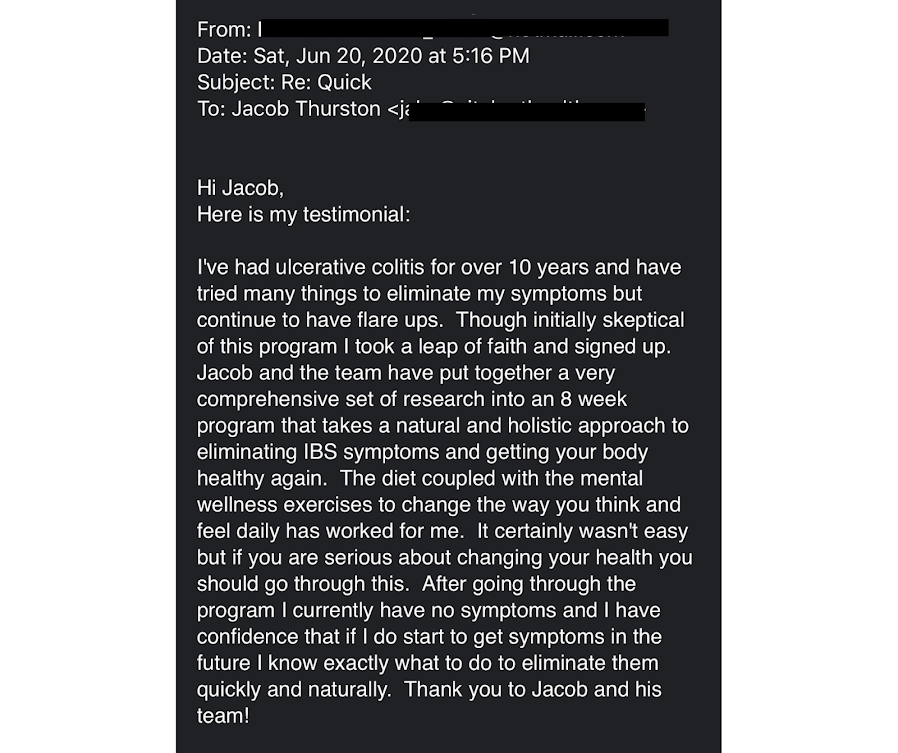 Can you relate with Franklin's battle with Ulcerative Colitis and his years of searching for relief from his symptoms?

If so, you need a whole body solution, like the one we used with Franklin, that addresses the root causes of your IBS at a cellular, microbial and neurological level.

IBS is a whole body problem as all the parts of our body are inter-connected with each other and work together.  You can’t just cut out a food group here and throw some probiotics into the mix there.  That’s what pop science tells you to do.

The safest and most effective way to put your IBS symptoms into remission permanently is to use a whole body approach that actually addresses all the root causes involved in your IBS symptoms.

That’s what we’re all about.  Getting people safe, effective, and lasting results.

Schedule a FREE 45 minute breakthrough session with my team where we'll get you clear on how to finally overcome and breakthrough your IBS and IBD problems.

But it's not for everyone...

Here's who I can help:

You must be willing to take 100% responsibility for your health.  You are not a "victim" to this disease.

You must be a person that is coachable and open to a totally different method than what you've learned or know.  If you think you've got it all figured out then this is not for you.

You have to be completely sick and tired of your current processes.  Whether that be a doctor or your own supplementation method.

You have to be hungry to fix this problem NOW.  I mean really committed.  Not to fix it next week, next year or next decade but now.

And, you have to be open to investing in yourself and your health.

If you're tired of being terrified that you might miss the bathroom, the toxins building up in your colon, the overwhelming emotions, the panic attacks that completely consume you and not being the person you need to be for the people depending deeply on you, and you're ready to get real results, then I'm making the time to show you how it's done.

You Don't Have To Do This On Your Own... Book Your Call NOW

This website uses cookies to improve your experience while you navigate through the website. Out of these cookies, the cookies that are categorized as necessary are stored on your browser as they are essential for the working of basic functionalities of the website. We also use third-party cookies that help us analyze and understand how you use this website. These cookies will be stored in your browser only with your consent. You also have the option to opt-out of these cookies. But opting out of some of these cookies may have an effect on your browsing experience.
Necessary Always Enabled
Necessary cookies are absolutely essential for the website to function properly. This category only includes cookies that ensures basic functionalities and security features of the website. These cookies do not store any personal information.
Non-necessary
Any cookies that may not be particularly necessary for the website to function and is used specifically to collect user personal data via analytics, ads, other embedded contents are termed as non-necessary cookies. It is mandatory to procure user consent prior to running these cookies on your website.
SAVE & ACCEPT